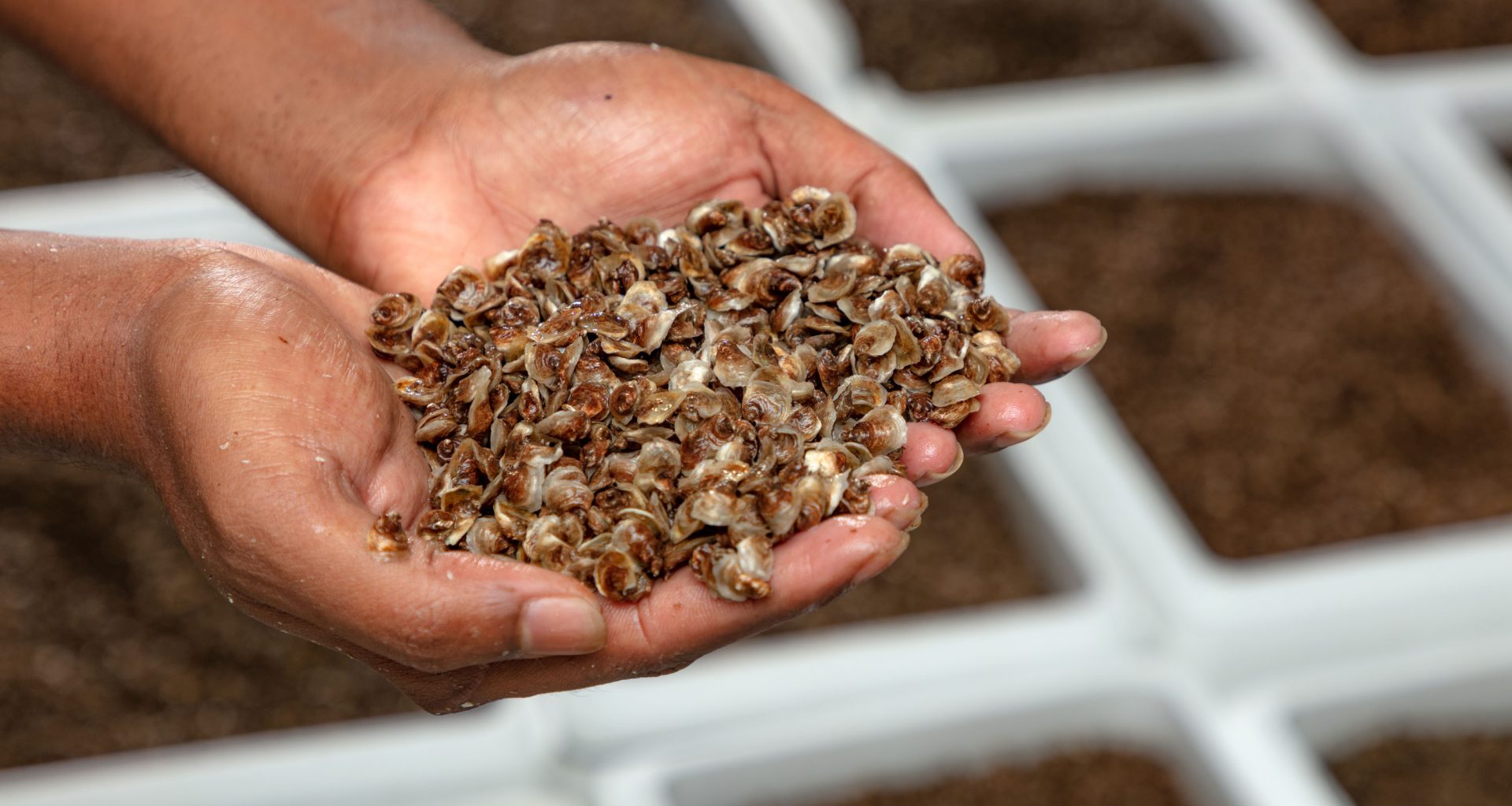 "Dibba Bay is the first and only gourmet oyster farm in the Middle East." - Dibba Bay

Oysters. Polarizing and inundated with increasingly outmoded hierarchy and dichotomy: a historically “poor man’s” food now synonymous with luxury; beliefs that they are only edible in months with an “r” debunked with the evolution of modern farming and food safety standards; and the rough nature of oyster farming juxtaposed against the elegant handling by top-tier chefs.

Dibba Bay Oysters, farmed by East Coast Shellfish LLC, adds to this discourse by refuting that edible oysters can only be grown in cold waters. Far from easy but sharp in its methodology, founder Ramie Murray speaks to Katrina Kufer about the Middle East’s first and only gourmet oyster farm proving that luxury and sustainability are not mutually exclusive.

In line with the UAE’s movement to eat local in a country that imports around 80% of its food, Ramie Murray saw potential in the neglected oyster industry. While the Emirati economy once relied heavily on oysters to cultivate pearls, it took a hit as Japanese techniques seized market precedence in the early 20th century. Murray’s inadvertent revitalization of the industry by shifting from pearl to edible species has been lauded as a pioneering effort towards increasing the nation’s food security and economy by the UAE government. “I saw an opportunity to have a local premium food product grown in a sustainable way,” says Murray. Growing up in the UAE and studying product design in his homeland of Scotland, it was his time working in renewable energy in Oman that triggered the revelation that the clean, calm coast towards Fujairah was not being commercialized. “It wasn’t a deliberate reinvention of the existing oyster industry, it was only on reflection that we realized the whole reason we were able to grow high quality edible oysters was for the same reasons pearl oysters had been flourishing in this environment for so many years.”

As a nation surrounded by ocean with one of the globe’s highest per capita seafood consumption, aquaculture is key to Emirati agriculture. “Aquaculture properly managed can potentially supply almost everything the country needs,” observes Murray. Dibba Bay’s 18-hectare farm is located on Fujairah’s coastline. Employing state-of-the-art equipment and ISO 22000 and HACCP-certifications—with Halal, Friend of the Sea and Organic certifications underway—the offshore sub-tidal longline farming system allows oysters to be grown in the open ocean. “No one thought it was possible mainly due to the perception that oysters can only grow in cold climates,” notes Murray, adding that edible oysters were additionally overlooked as they are not a local diet staple.

The pivot in 2016 was received with enthusiasm from local authorities and skepticism from the food industry, with the water at the root of Dibba Bay’s contentious and successful oyster production. “The environment we are in is quite unique in that we have ideal temperatures in the waters and a rich density of food that’s available for most of the year,” explains Murray, who selected the adaptable Pacific Cupped species, a popular Asian breed also farmed in France and Alaska. “Our oysters have an incredibly fast growth rate, needing only 7-9 months to reach adult size. European oysters, in comparison, can take up to 2-3 years to grow to market size, and you would only see growth rates peak in this way in the summer.” The water allows the oysters—and other aquatic life—to grow 5-10 times faster.

The sea’s cleanliness and salinity permit the oysters’ trademark characteristics: their distinctive shells—opaque white from the water’s calcite content from the nearby limestone mountains—and texture. “Our oysters are exceptionally meaty,” he says. “Thanks to abundant phytoplankton supply in the water, our oysters have an unusually high meat-to-shell ratio and are often 20-30% higher in meat than other oysters on the market.” Murray also employs a tumbling technique, which knocks oysters together and changes the angles to increase meat content and lessen narrow, shallow shape. Therefore, Dibba Bay meat-to-shell ratios vary between 18-25%, depending on the season, making them “tremendously plump.”

Oysters are directly impacted by changes in the water therefore seasonality plays a fundamental role in texture and taste. Possessing their own merroir—oysters adopt the characteristics of their surroundings in appearance and taste—the same species differs depending on its location. Dibba Bay oysters’ unique crisp, briny and meaty trifecta sees them hold their own in the high-end oyster market.

Export-led, 65% of Dibba Bay products are shipped to Russia, the Maldives, Oman, Hong Kong, GCC and more, with the USA in the pipeline for 2023. Harvesting twice weekly all year, Dibba Bay gathers 200,000 oysters per month—with projected growth to 600,000 by Q1 of 2022. “We are in a very advantageous location in that we are only a 90-minute drive from Dubai airport, which is a huge transport hub to the world, so it allows us to ensure incredibly fresh oysters are delivered to customers in a regular and reliable fashion all over the world,” says Murray. “We can literally harvest in Dibba in the morning and be in most major capitals by dinner time.”

But broaching the market—entrenched in negative stereotypes of warm-water oysters or traditional, prestige-led preferences for European imports—was a hurdle. “Getting to scale was our main challenge to be able to compete price-wise considering perceptions of a ‘new origin’ of oysters,” says Murray, adding, “when we first launched, we had to do a lot of work to introduce the product and nothing but face-to-face tastings and explanations were required to convince Chefs to take a locally grown oyster seriously. Thankfully the quality of the product spoke for itself so it was a matter of putting the hard yards in visiting as many restaurants as possible.” Praised for an unparalleled freshness in an import-driven market, the homegrown oysters can now be found across Dubai in outlets including The Maine, Boca, BB Social Dining, Myrra, Traiteur at Park Hyatt, Caesars Bluewaters, Four Seasons, The Fairmont, Jumeirah Group, Spinneys, Carrefour, Waitrose, Kibsons, and more.

To further increase local accessibility and disassociate it from an exclusive experience, Dibba Bay has its own restaurant, one of the few genuinely farm-to-table concepts in the UAE, from which it also does home deliveries. “A farm shop where people can come and have a platter of oysters directly from the people who have grown it for an affordable price,” he explains. “Our flagship location is in Umm Suqeim 1 fishing harbour in Dubai and our customers love the fact that they can enjoy a premium product in a relaxed setting. We revel in being able to provide a high-quality locally produced product at a very accessible price and we want as many people as possible to be able to eat and enjoy the local oyster.”

Dibba Bay’s mission also highlights how commercially grown shellfish are “ecosystem engineers” for their contribution to ocean health. A sustainable form of aquaculture with no negative impact on the environment, oysters improve water quality by filtering between 30-50 gallons of sea water each every day without requiring irrigation, feed or fertilizer, and reduce carbon density via their algae consumption. The farm’s hanging lantern-like baskets used to grow the oysters act as floating reefs, promoting seaweed development, providing refuge for fish, and attracting turtles and other marine life.

“We have a great story: thanks to the unique conditions of the ocean, which made Arabia world-renowned for its lustrous white pearls, the Dibba Bay oyster is thriving and continues to showcase the heritage of the region through its distinctive and vibrant white and gold shell,” says Murray. “The unique qualities of the waters of the Emirates, which historically have been through the legendary white pearls, now live on through the Dibba Bay oyster shell.”