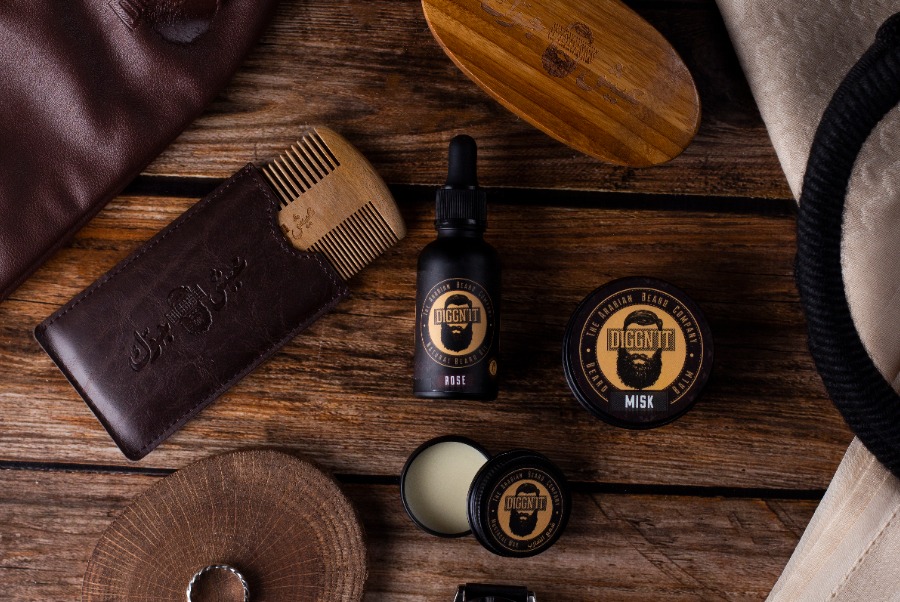 Grooming is supposed to be universally recognized and unisex across hundreds of cultures and regions. In fact, the market for men’s grooming products in MENA is expected to grow at a CAGR of 6.4 percent between 2020 and 2025. In the context of male fashion and wellness, influencers have had a growing impact on the men’s grooming sector, particularly among millennials and generation Z male youths who seek to improve their physical appearances and live in urban or city areas.

Diggin’It Founder, Waseem Sendi, shares a strong message to men about the positive attributes to men’s grooming, personal care and embracing individuality. Reefaya Noortaj explores the evolving men’s care industry in the Arab world – and how extraordinary businesses like Diggin’It in Dubai –  are aiming to challenge society’s notion of Arab masculinity.

The skin care, makeup and cosmetic industries have been thriving across the  GCC market space. Bustling billboards and social media advertisements can be seen glossed with women advertising innovative beauty products and female grooming; but what about advertisements targeted at men, specifically Arab men? Personal hygiene and grooming are still considered taboo for Arab men as these are stereotypically more feminine habits to have. However, in reality, grooming is meant to be unisex and universally accepted amongst thousands of cultures and countries. In fact, MENA’s men’s grooming products market is projected to witness a CAGR of 6.4% during the forecast period between 2020-2025. In the light of male fashion and wellness, influencers have increasingly impacted the men’s grooming industry, particularly among the millennials and generation Z male youths residing in urban or city regions who want to enhance their physical appearances. Waseem Sendi, the founder of Diggin’ It, is challenging the toxic stereotypes surrounding men’s grooming in the Arab world. Co-founded in 2015 with partner Layal Ismail, Diggin’ It is a men’s grooming company with a mission to change the way the world sees the male beard since negative connotations of Arab men with a full face of beard hair (long or short), are present in both Arab and international communities.

From what started as a small idea in their Saudi Arabian kitchen, Diggin’It has now translated into a fully-operating business that is transforming the way men in the Middle East think, feel and style their beards. Sendi comes from humble Saudi and Canadian beginnings, working in the pursuit of helping others whenever possible. From starting out as a camp counselor in Canada to a camp Coordinator for kids with cancer to a social worker, Sendi was all for giving back to society. “2014 was not only the beginning for me and my co-founder but also the start of my journey. After unsuccessfully landing my bread-grooming products in Saudi Arabia, I realized there was a gap in the market and that such companies did not exist. I began to immerse myself into the world of men’s grooming and researched what was available globally, understanding that there was an entire market outside of the Middle East,” says Sendi.

Coming from a highly-cultured background, Sendi’s take on tackling negative stereotypes around men’s grooming in the Arab world is different. “Our vision is to have a positive impact on young men growing up across the globe in general, and in the Middle East specifically. We have too long been told that the measure of manhood is the lack of emotion and the shutting down of our emotional development. At 12 years old we’re told to man up, not cry, and then we grow up having nowhere for these emotions to go to” explains Sendi.

According to Allied Market Research, the men’s care market is expected to hit $166 billion in 2022. Additionally, nearly 40% of adults aged 18-22 have shown interest in gender-neutral products, according to an NPD iGen Beauty Consumer market analysis. With men’s care rapidly growing globally, it is only natural to enter the Middle East market space. With brands such as Diggin’It and as well as other mega beauty conglomerates marketing the benefits of men’s personal maintenance in the Middle East, the taboo around this stereotype will likely become of the past for Arab men. So Sendi took matters into his own hands and decided to discover the significant gap in beard-grooming in Saudi’s vast market.

“Inspiration grew stronger after feeling the negative stereotypes that surround Arab men. When I first started growing my beard, I would receive comments from others on how they believed that it would be more appropriate to shave before entering an airport, as bearded Arab men have long been associated with terrorism. I endured the comments but it did not hinder my mission to express my true authentic self. With my co-founding wife’s support, I proudly continued to grow something that was a gateway to historic Arab tradition and allowed me to ‘live my vibe.’ I not only empowered myself but made it my mission with Diggin’It to take back the beard and empower young Arab men. Diggin’It is more than a grooming space but an entity that promotes a strong message of male individuality, confidence and pride.”

"We have too long been told that the measure of manhood is the lack of emotion and the shutting down of our emotional development."

Sendi believes that the solution to tackling toxic masculinity is by directly addressing it and offering a redefined notion of manhood. He shares that men face an immense amount of pressure to conform to societal standards of traditional masculinity, such as lacking emotions since strong men compartmentalize. “We hear the words ‘Man Up’, meaning to ignore natural emotions since men are stereotyped to be born emotionally and mentally strong. When men express their emotions, they are often met with scrutiny and rejection for not being “manly” enough. One’s appearance is a form of expression as fundamental as speaking and writing. By being deliberate and paying attention to that part of a man’s identity, it gives us the courage to step out into the unfamiliar and the areas of infinite potential,” says Sendi.

Sendi and his co-founder recently starred in the hit TV show ‘Shark Tank’ Saudi Arabia edition where they pitched their unique business proposal which was ultimately rejected. Sendi explains, “While they turned it down, the opportunity was a once-in-a-lifetime chance that validated my mission. Diggin’It products, currently found in ten stores in KSA, have sold to over 25 countries online and in-store products are quickly expanding into the Middle East and Africa. The brand has grown its revenues into millions since 2015 with our excellent customer service, all-natural ingredients and our community-driven mission of becoming the change we wanted to see.” Sendi predicts that the men’s grooming industry in the Middle East will continue to grow and there will be more entrepreneurs identifying how they can provide value to a sometimes crowded market.

"One’s appearance is a form of expression as fundamental as speaking and writing."

He explains, “Just as in many other parts of the world, consumers want the beauty products they purchase to make them feel good about themselves, so I think we will see more and more new brands that pivot towards social impact beyond the bottom line. Just as standards of beauty are changing all over the world, these changes actually create room for even more value and more impact on society. Consumers do have the power to influence brands, and the beauty industry has historically been very responsive to consumer demand. So the good news is that as the relationship between male beauty brands and consumers continues to develop, the products and activities will also develop to match their desires for more authenticity, transparency, and impact. I think as the Arab male continues to find unique ways of expressing himself, the male grooming industry is perfectly placed to meet them with these changes and support their journey of becoming. That puts Diggn’It in a very exciting position as a part and player in that ongoing narrative.”

While the Arab world has widely socially progressed, more so in recent years, there is still more unpacking to do until virtually little to no typical stereotypes are attached to either gender. The Middle East market is gradually accepting more fluidity that brings more variety of business in the region. In the 21st century, brands like Diggin’It equally promote social missions that are stored within the core of products that embrace individuality.

PR via Empyre Communications in Dubai.

Born in Bangladesh and raised in the Middle East, UAE and Bahrain, Reefaya is a postgraduate from The London School of Economics in U.K. and an undergraduate from Sussex University. Reefaya has an immense love for sustainable fashion, social development and art.