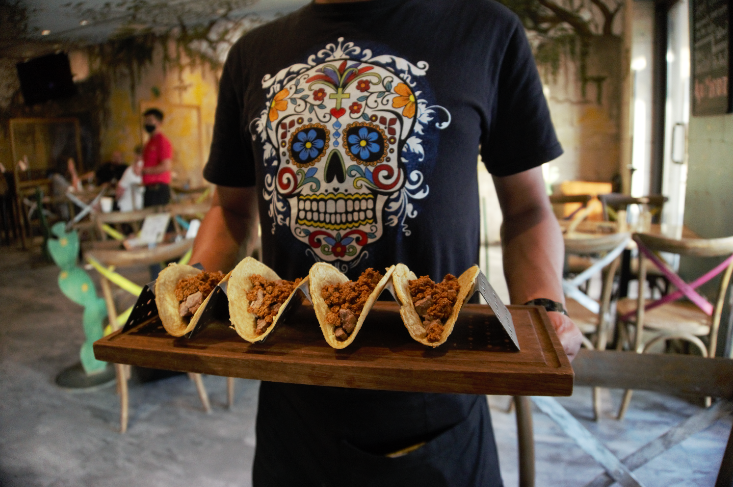 Mexican food is tied to Mexican cultural symbolism and social structures, expressing practices that demonstrate and raise awareness of its heritage—so much so that the cuisine is on the UNESCO Intangible Cultural Heritage List.

Maria Bonita, a Dubai restaurant focused on authenticity since 2003, will soon be expanding this message beyond its three branches in Dubai—Umm Suqeim, Madinat Jumeirah and Sustainable City—towards the wider Middle East.

While Dubai is no stranger to a broad offering of flavors, Maria Bonita has strived for nearly two decades to make its mark by simply being Mexican: no gimmicks, just a straight-forward philosophy of celebrating diverse traditional Mexican culture and using fresh, vibrant and accessible dishes as a means of storytelling. It has been a fundamental part of its success in a city rife with continual stimulation of new restaurants.

Katrina Kufer speaks to Carlos Padilla, the founder of the Mexican-owned and run restaurant, who shares his thoughts on how to introduce a traditional restaurant in a foreign context, maintain cultural integrity in a sea of trends, and why Mexicans have so much fun.

“We identified that there was a need for an authentic Mexican place in Dubai to share the richness of our cuisine and culture,” says Padilla of his decision to open Maria Bonita in 2003, which did not come without challenges but was fueled by his passion to change careers to pursue the F&B industry. While Mexican cuisine is largely comprised of elements unfamiliar to an Arab palate—beans, avocado, nopales, tomatillos, maize, moles, and drinks such as Agua de Jamaica or Horchata—the restaurant has cemented itself as a mainstay on the evolving Mexican food scene in Dubai. With recent years seeing a boom of Tex-Mex, burrito bars and mid-range Mexican outlets, Dubai diners now have over 20 venues to choose from, ranging from takeaway through to fine dining in 5-star hotels.

It would be fair to assume that Maria Bonita would adapt to a wave of trendy Mexican eateries (La Carnita’s award-winning “fiesta” ambiance, or Maiz Tacos, which began as a food truck by its Arab founders) with slick, contemporary takes on Mexican décor (Muchachas by indie restaurateurs Tom & Serge, or La Tablita from Hyatt, lauded for their F&B outlets), or even introduce a little local or fusion-inspired flavour into its culinary profile (think Zoco) in a landscape that arguably is more “globalized Mexican” than “abuelita’s kitchen”. Rather, Maria Bonita has opted out, choosing to embrace the challenge to stay relevant without veering towards competitiveness by relying on tradition. “That’s our essence,” says Padilla. “Instead of going away from it, we have spent the last 20 years perfecting our true flavors.” This means homemade tortillas, which formed the basis of Mayan, Aztec and Olmec civilizations, and are referenced in a Mayan creation story; Tacos Al Pastor, a dish with humble origins which, despite being chicken in Dubai, has a real roasted flavor from being cooked on a vertical spit; or slow cooked salsas unafraid of a little heat. “Be authentic, never compromise the quality of the processes or ingredients, and have fun doing it,” says Padilla. “Food is a universal language, so we always put our best in to make every element on our menu standout—and people love it.”

“Food is a universal language, so we always put our best in to make every element on our menu standout—and people love it.”

“Mi Casa es Tu Casa [my home is your home],” says Padilla, and Maria Bonita embodies this relaxed, unassuming hominess where the food is allowed to take precedence. This draws a specific, yet simultaneously far-reaching, crowd. “Our customers are both locals and expats; we have families, couples and groups,” he notes. “We have something for everyone.” Their clientele includes targeted visits, passers-by walking over from the beach, for example, or individuals coming to buy the imported Mexican food products from the small shop inside the restaurant overlooking two chatty parrots. While the brunt of diners is in the 35-44 age range (with 25-34-year-olds following closely), there is a certain kind of comfort and easy eating—without taking a deep dive into extremely traditional (i.e. have to have grown up with it to love it, like chapulines or tripas) ingredients and dishes—that keeps people coming back. Research shows that 4 out of 5 of Maria Bonita’s diners are repeat customers, which indicates that despite the revolving-door of fresh, innovative and imported restaurant concepts across the city, Maria Bonita’s unpretentiousness is onto something.

Many of Dubai’s restaurants engage entertainment strategies, particularly when it comes to Latin American—or even Latin American-adjacent—outlets, which can serve as additional, rather than complementary, components to the dining experience. Think feathered costumes, salsa dancers and live bands that on occasion veer towards novelty to highlight and showcase cultural elements, as well as create a “wow factor” to encourage repeat customers, or at least provide ample word-of-mouth fodder. Maria Bonita may firmly focus on authenticity when honoring the food of its ancestors, but it is done with a healthy balance—Mexico’s culture is, after all, warm and vibrant, and Padilla notes that this is an element guests enjoy. It is key to evolve without losing its way, and on select occasions and timings, and not uniformly across their multiple branches, Maria Bonita uses entertainment to enhance, not overshadow, the Mexican experience: “In Mexico, having fun is something we take very seriously.”

Dubai is no stranger to new restaurants, but Padilla, through Maria Bonita, has shown that even though the city has a food landscape and diverse audience that is constantly stimulated—and possibly inundated—with novel, fusion and niche concepts from across the globe, that it is not necessary to compete with innovation and one-upmanship to find success. Sometimes keeping it simple, being authentic, and trusting the value of heritage and food that has evolved and formed a pillar of a culture is more than enough to draw people in and keep them coming back.